To Jonas, a new project is a new opportunity to win

When Jonas oversees a major project that is of great significance to the client, he draws on his experience as an elite athlete. He is structured and strives hard to deliver the best solutions. Now he has been named one of Denmark’s brightest talents within IT.

“Sometimes it can be almost surreal to be in charge of so much”, says Jonas Hansen, 33, project manager in Netcompany and named one of Denmark’s top IT talents by Danish technology magazine Ingeniøren.  “If you look at the project as a whole, there is so much functionality, complexity and financial responsibility that it can be quite overwhelming. That is why it is important to me to break the project down into smaller parts. That way, it is easier to assess each part and know where to focus and what to prioritise.”

To Jonas, this is pivotal in the role of project manager: to see the big picture and to create structure. This is an ability he brings with him from his youth in Hellerup, north of Copenhagen, where he trained as an elite athlete in the 100 metres race. “When you have to juggle homework, exams, friends and training six days a week, you need to learn how to structure your everyday life.”

Jonas’ father was a police officer, and his mother an elementary school teacher. “There really hasn’t been any focus on technology in my childhood. But my dad often tells the story about how I, as a 4-5-year-old, was on a skiing vacation with my parents and was more interested in the bull wheel on the ski lift than in actual skiing.”

Later, Jonas’ parents got a computer and his interest in technology gathered speed. During his software studies at the Technical University of Denmark (DTU, Jonas got a job as a student assistant at Netcompany, where he has been working since. In the meantime, he also married Mie, became the father of Emily, now 20 months old, and stepfather to Saga, 8 years old. Additionally, he has built his own home cinema, where he spends more time geeking about sound and picture than actually watching movies. 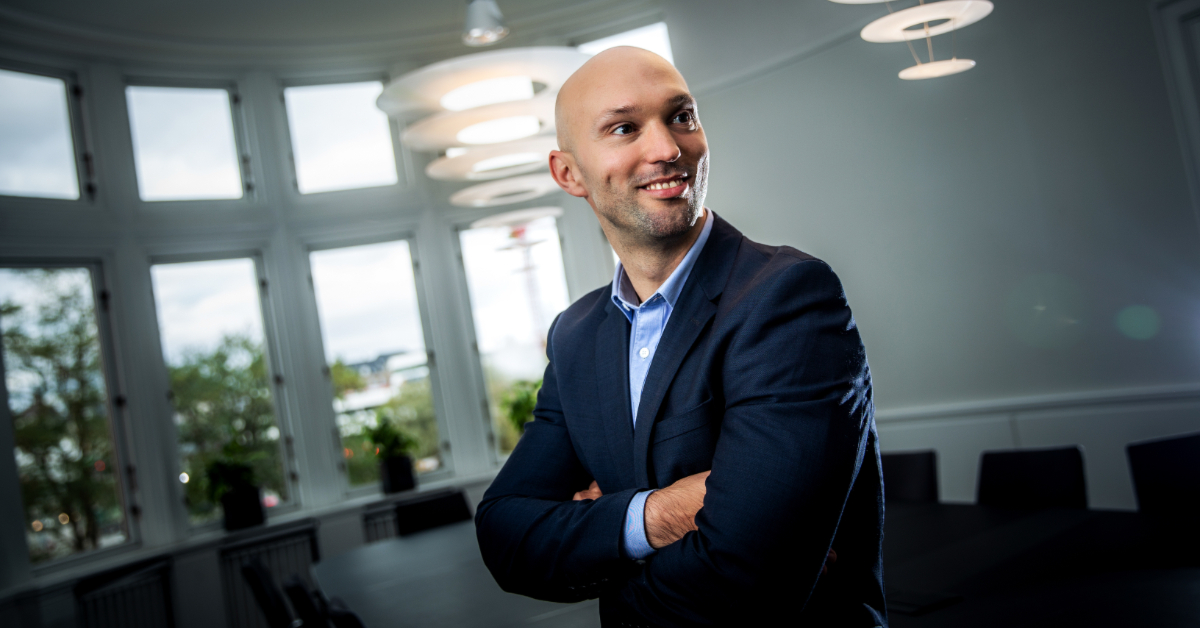 It’s difficult to manage a field you don’t understand

Jonas took the journey from student assistant to consultant, senior consultant and now manager. A classic Netcompany journey, if you will, where as a rule, IT people manage IT people. “I think it’s difficult to manage a field you don’t understand. If you don’t understand the technical complexity of an IT project, it is more difficult to be critical in terms of planning, activities, and estimates. One of the worst things to happen in project management is unforeseen surprises. That’s why it is so important to be able to ask the right questions and give input to possible solutions.”

Just how important it is that everyone in a project understands each other, became clear to Jonas when he was expatriated to China a few years back.

“It was a completely different country and mindset. In China, our main job was to make sure that the developers understood the client’s needs from a business perspective, and how we in Denmark work on optimizing the user experience rather than hiring more customer service employees.” While China may be noticeably different to Denmark, it is basically the same task Jonas is facing when collaborating with a client. “I need to make sure that everyone speaks the same language, that we understand each other, what must be delivered and when.”

It is important to Jonas to be able to see the value of the work he does. “As a consultant, you meet the company where you can really make a difference and create value – at the heart of the business. By finding solutions to the challenges, the client has identified, but also by seeing opportunities where they may not have looked for them.”

Jonas has been part of Netcompany for nearly 12 years, but he doesn’t feel like he has stopped evolving. “When you’re a consultant, it’s like getting a new job every time you are assigned to a new project. New technologies, new tasks, new colleagues, new clients… but with the same good terms and conditions.”

New projects also mean new opportunities to win. And that is something that speaks to the athlete in Jonas. Jonas says he can recognise the Netcompany mentality from the world of sports. He loves to win! And he most definitely does not like to lose, he says. When he learned he was named number 2 in this year’s IT Talent nomination, he was really excited to have been nominated. However, he couldn’t help but feeling a bit annoyed that he wasn’t number 1. “I accidently told my stepdaughter that “I lost the gold!”. I don’t think that’s something you want to teach an 8-year-old,” Jonas says and laughs.